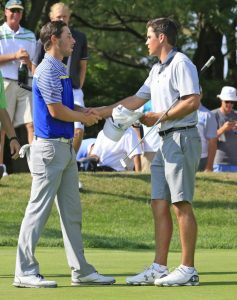 Two of the world’s top amateur golfers slugged it out in a memorable finish to the Porter Cup last summer.

A rare sequel is on the horizon when the 59th annual golf tournament is held this week at Niagara Falls Country Club.

Australia’s Harrison Endycott last year rallied from four shots down over the last seven holes to win by one over All-American Gavin Hall of Pittsford and the University of Texas. Both are entered again in this year’s Porter Cup, one of the country’s top amateur invitational events. It runs Wednesday through Saturday.

“It’s the first time we have the defending champion back since Patrick Rodgers in 2012,” said Cassie Stein, Porter Cup assistant tournament director. “That’s really big for us. It’s important when top players come back.”

Five men have won the event multiple times but only one has gone back to back. That was Bob Smith, way back in 1966 and ’67.

Endycott and Hall are good bets to be on the leaderboard Saturday.

Endycott, 21, is ranked No. 17 in the World Amateur Golf Ranking, and he’s No. 1 in Australia. He tied for fourth in the medal round of the British Amateur three weeks ago in England. An Australian has finished in the top five each of the past five years.

Hall just finished a great career for Texas. He was second-team All-America as a junior, tied for 11th at the NCAA championships as a senior and currently ranks 26th in the world ranking. He has placed in the top eight each of his five appearances in the Porter Cup, including a tie for second in 2010 when he was only 15.

Hall is a strong contender for one of the 10 spots on the U.S. team that will meet Great Britain and Ireland in the Walker Cup matches, to be held in Los Angeles in September. The U.S. team will be selected after the U.S. Amateur is held is Los Angeles Aug. 14-20.

“There’s a couple players still vying for a spot, and winning here would help their chances a lot,” Stein said.

Another is 39-year-old Scott Harvey of North Carolina, who placed third last season. He won the 2015 U.S. Mid-Amateur (25 and over) title.

New week: The third week of July is a new spot on the calendar for the Porter Cup, which traditionally has been held the fourth week of July. Top amateurs historically have gone straight from Lewiston to the Chicago area for the Western Amateur, a major event that runs the first week of August. That timing, however, has become problematic in recent years, Porter Cup officials say.

“It’s a new experience for us,” Stein said. “The Western is a very grueling event. Scheduled the week before, we found we wouldn’t always get some of the top players because they didn’t want to play a big event going right into the Western.”

The Western is 72 holes of stroke play, followed by match play. The finalists at the Western potentially play 144 holes.

“This sets up a schedule that the players like,” Stein said. “They get a week off before the Western. Then there’s a week off after the Western leading into the U.S. Amateur.”

The Porter Cup is slotted into the third week of July for the next four years. It now will be held on the same week as the Southern Amateur, which like the Porter Cup has a significant history of attracting top players. The Southern Amateur each year travels to different courses across the Southeast and into Texas. This year it’s at the Country Club of North Carolina in Pinehurst, N.C. It will be interesting to see how the fields play out over the next four summers. 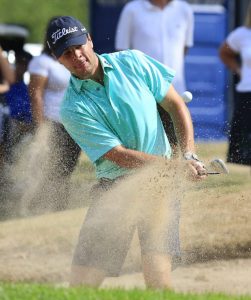 Derek Bard was an honorable mention All-American at Virginia this past season. (Harry Scull Jr./Buffalo News)

All-Americas: The top-rated player in the field is Alejandro Tosti, No. 13 in the world and a second-team All-America who just finished his junior season at Florida. The 5-foot-6 Argentinian made the semifinals of the British Amateur.

Other 2017 honorable mention All-Americas in the field are Virginia’s Derek Bard, Kent State’s Ian Holt and Michigan’s Kyle Mueller. Bard was a U.S. Amateur finalist in 2015. He won the Monroe Invitational in Rochester in June and the New York State Amateur last summer.

Texas Tech’s Hayden Springer made the round of 16 at the British Amateur. Georgia Tech’s Chris Petefish was second at Monroe.

New greens: Niagara Falls CC installed new greens on holes No. 1, 6 and 9 since last season. The club now has rebuilt the greens on the entire front nine and the par-3 12th the past three years. The rest will be rebuilt the next couple years.

The new greens offer much improved drainage, have a tad more slope and tend to play faster. That’s one reason it may be tough to challenge the record score of 22-under set by PGA Tour player Brian Harman in 2007.

“I don’t anticipate we’ll see a record this year, given the kind of spring we had and the good condition of the greens,” said Michael Vitch, tournament co-director. “The rough is thick in spots because of the rain, and the greens are faster than they were when the record was set.”