Top women players get their own Porter Cup 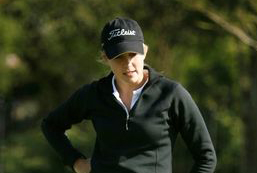 Rene Sobolewski had wondered about it since she was as tall as her golf bag.

“I’ve been asking people about this for a long time. I always wondered why there was no women’s Porter Cup, or why women couldn’t play in it,” Sobolewski said this week. “So it was pretty cool when I got the email that they were having one this year. Finally, they’re involving us girls.”

They are with a tournament all their own. The first-ever Women’s Porter Cup gets started today at Niagara Falls Country Club, with 38 players set to play three rounds of stroke play.

“I really hope it starts out strong so that it gets a good name, just like the men’s Porter Cup has. It would be great if this could turn into something special,” said Sobolewski, the Nichols graduate who recently completed her junior season with the Vanderbilt golf team. “I know the Porter Cup is a huge name on the men’s side around the country, so hopefully it’ll bring some recognition and get people to see what we have to offer here.”

Sobolewski is particularly excited to be able to play tournament golf again close to home.

“I honestly don’t think that other than playing Buffalo district events, I’ve ever been able to sleep in my own bed, wake up in the morning and go to a tournament, so that’s pretty cool,” she said.

Sobolewski carded a career-low round of 3-under-par 69 during the first round of the Bryan National Collegiate tournament in March. She struggled in the collegiate postseason, however, and looks at this week’s event as a chance to get back on track.

“In a summer tournament, there’s no pressure of the team aspect, or college coaches and all of that,” she said. “A lot of local people haven’t been able to see me play. I’m not really too worried about score or anything, it’ll just be good to be able to see people and play golf in my hometown. That doesn’t really happen too often.”

Sobolewski came to NFCC several times as a spectator for previous Porter Cups, and served as a caddy during the men’s qualifying tournament a few times, but doesn’t have much playing experience on the course.

She will be joined in the field by other local players Cat Peters, Michelle Hanes, Ashleigh Frieday, Kit Creighton, Gaelin Carrig and Chelsea Dantonio.

Peters recently finished her freshman season at the University of Michigan, making six starts. Frieday played at Robert Morris, while Creighton played for Division II Florida Southern last season as a freshman. Carrig played in eight events as a sophomore for the Mercyhurst women’s team.

The pre-tournament favorite is Grace Na, a first-team All-America selection by Golfweek who is ranked 24th in the Women’s World Amateur Golf rankings.

“I’ve always heard about the men’s tournament, the golf course and where it’s located. I just wanted a different experience,” said Na, a native of Alameda, Calif., who recently finished her junior season with Pepperdine University. “The West Coast teams don’t get to play on the East Coast very often, so this was a different experience.

“I think it’s going to be really special. Hopefully in the future it just keeps growing.”

Na is a three-time All-American who in the 2012-13 season set a school record with a 72.17 stroke average and was named the West Coast Conference Player of the Year for the third time.

Another top-50 player in the WWAG rankings is Krista Puisite, a Golfweek honorable mention All-American. Puisite is a 22-year-old native of Latvia who finished her career with Texas State University this spring. She won a school record five tournaments in her career and three last season, when she finished second in the country with 119 birdies.

In keeping with the global tradition of the men’s tournament, the Women’s Porter Cup has competitors from the U.S., Canada, New Zealand, Latvia, Thailand and China.