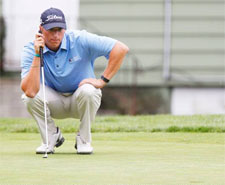 LEWISTON – If you missed seeing Justin Thomas and Patrick Rodgers playing together in the first two rounds of the 54th Porter Cup, don’t worry.

They’re grouped together again – this time in the final tee time of the day, the one reserved for those at or near the top of the leader board.

Richy Werenski lines up his putt on 14 green during the second round of the Porter Cup. (Mark Mulville/Buffalo News)

Thomas was almost as good, firing a 7-under 63 to get to 8 under for the tournament, a total Rodgers matched after shooting 5-under 65 Thursday.

“We were feeding off each other and it was a good day for both of us,” Thomas said.

Not even the rain that started falling on his back nine was enough to cool off the white-hot Werenski, though. The 20-year-old from South Hadley, Mass., has yet to make a bogey in his first Porter Cup appearance. He went out in 5-under 30 Thursday, closing his front nine with four straight birdies.

“It just suits my eye really well,” Werenski said of the 6,871-yard Niagara Falls Country Club layout. “It calls for good tee shots, and I usually hit the driver pretty well. I hit a lot of fairways, and if you can do that out here, you’re going to hit a lot of greens. [Thursday] I made putts.”

Werenski played last week at the Players Amateur in South Carolina, but came away with a disappointing finish, tied for 41st. Despite that, he saw positive signs his game was coming around.
“There was a lot of good stuff, it just didn’t click,” he said. “It’s starting to click now.”

Werenski birdied the difficult par-3 16th, then got up and down out of the left greenside bunker on the par-3 18th to finish his round, a solid showing on the closing three holes at Niagara Falls.

Rodgers did it one better, with some flair. After knocking in a 30-foot birdie putt on the par-4 17th, he holed his bunker shot for birdie on 18. That helped him finish his back nine at 5-under 30, after he shot even par on the front.

“I think you have just as many opportunities on the front, for me it was just I had to get settled into my round. You can’t shoot over par any round. I’m right where I need to be, I just have to play well for two more rounds,” the defending champion said.

Thomas has had one bad hole all tournament – when he hit it out of bounds on No. 16 and made double bogey. He was frustrated with his putting after the first round, saying he had 11 birdie attempts inside 15 feet, and only converted three of them.

After a quick tip after the round from Rodgers – the two are long-time friends – he got things straightened out on the practice green. The result was a flawless second round, one that featured a stretch of four straight birdies from Nos. 7-10, including putts of 35 feet on the eighth and 20 feet on the ninth.

“After that I really tried to hammer on the gas pedal and see how low I can go,” Thomas said. “I played solid coming in. It was just a good day.”

The next two days shape up to be the same. Rodgers and Thomas are ranked fifth and sixth, respectively, in the Scratch Players World Amateur rankings, while Werenski is 70th.

University of Florida senior Tyler McCumber, the 58th-ranked player, is also in the group at 8 under, tied for second place. McCumber ripped off five straight birdies and six in seven holes, from Nos. 9-15, as some of the game’s best amateurs showed that despite some gusty wind and the rain, it’s going to take a low number to earn the winner’s green jacket.

“There are a lot of birdies to be made out there,” McCumber said. “You’ve just got to capitalize.”

First-round leader Denny McCarthy is one of three players tied for fifth, five shots back at 7 under. McCarthy shot 1-under 69 Thursday. James White, a teammate of Werenski’s last season at Georgia Tech, is also 7 under, as is Ontario’s Corey Connors.

Tee times have been pushed back a half hour today, meaning the first group will go off at 8:30 a.m., with the leaders scheduled for 12:40 p.m.