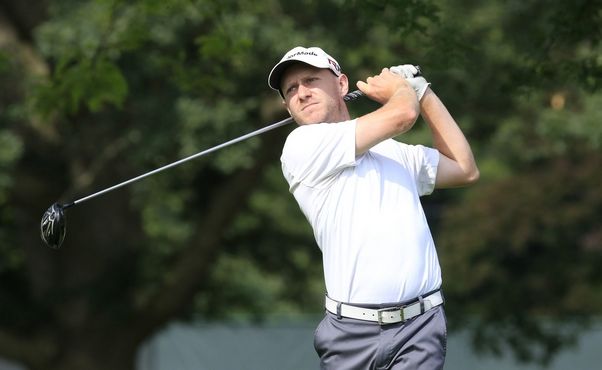 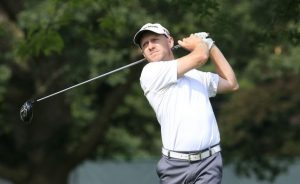 It took one round to find his game after being a late addition to the Porter Cup, but Desmond Stoll rebounded Thursday with an even-par 70. (Harry Scull Jr./Buffalo News)

The 23-year-old from Lockport got a call that he was in the field for the Porter Cup for the first time.

So while it’s been a whirlwind, he settled in during the second round Thursday, shooting an even-par 70 to move 13 spots up the leader board.

“It was kind of chaotic getting the call that morning and all of a sudden I’m here,” Stoll said. “It was a lot to take in, just trying to figure out the atmosphere and everything. I didn’t have a lot of time to do much prep, but I’m happy to be here.”

Last year’s Buffalo District Golf Association champion, Stoll’s first round Wednesday was going along smoothly enough until the closing stretches. He made a double bogey on the par-4 15th hole, then dropped another shot on the par-3 16th.

Things went from bad to worse on the tee at the par-4 17th when he made a tentative swing and hit out of bounds, eventually leading to a triple bogey. That ballooned his score to an opening-round 78.

“It was just sloppy all around,” he said, “which was frustrating because I felt like I was hitting it good all day. I felt fine afterward, because I know my game is strong right now.”

Stoll recently finished 11th in the Northern Amateur at Sand Creek Country Club in Indiana, finishing at even-par through 54 holes. He’s determined to chip away at the leader board in the last two rounds this week.

“I’d like to get a couple back each day,” he said. “I need two, good under par rounds. That’s all I can do. When you put yourself out of position in the first round, it’s tough. You can’t win it the first day, but you can definitely lose it, so I have a lot of ground to make up.”

Along the way, he’s trying to soak up as much of the Porter Cup experience as he can. He’ll compete in the New York State Amateur later this summer, but then will make a run at a professional career in the fall, moving down south to play the mini-tour circuit. He’s also considering Web.com Tour qualifying school.

“I’m happy with where my game’s at,” said Stoll, who plays out of Lockport Town & Country Club, “so I’m going to take a run at it.”

A pair of birdies at No. 6 and No. 8 got Stoll to 2-under Thursday, but he dropped a shot at the par-4 ninth – which played as the toughest hole on the course. He then went bunker to bunker on the par-5 11th, leading to a disappointing bogey, then played even from there coming in.

“I just couldn’t really get anything going,” he said. “Yesterday, the back nine was definitely an issue. I don’t really know what happened. Sometimes when it starts spiraling out of control, you’ve just got to slow it down and tame it. Hopefully that was a fluke. Today was a lot better.”

Stoll finished his collegiate career at Division III Central College in Pella, Iowa, by breaking the Dutch’s program record with a 72.9 stroke average. He also won the Iowa Conference Player of the Year.

Stoll won’t be alone when he heads south. Williamsville’s Billy Gaffney, who is also in the field this week, plans to move with him and also pursue a professional career. Gaffney shot a round of 4-over 74 Thursday, with a triple bogey on the par-3 18th serving as the costliest blemish on the scorecard.

They are chasing leader Gavin Hall of Pittsford, who shot a 4-under 66 Thursday to reach 9-under 131 through 36 holes. Australian Harrison Endycott is in second at 7-under 133 after a round of 6-under 64 Thursday that tied for best of the day.