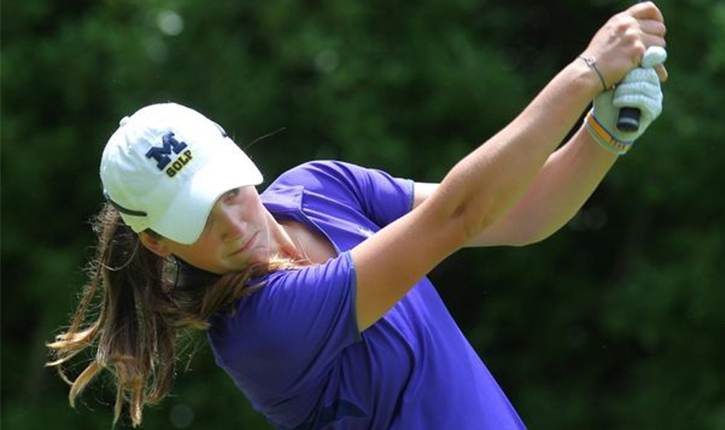 Catherine Peters of Clarence Center watches her tee shot on the par 3 18th during the first round of the Women’s Porter Cup at Niagara Falls CC in Lewiston Thursday, June 11, 2014.
(Mark Mulville/Buffalo News)

Brian Oakley initially wasn’t sure the Women’s Porter Cup ever was going to get off the ground.

Prior to its inaugural event in 2013, commitments were slow to trickle in.

“We started off really slow, with only 10 or 15,” said Oakley, the director of Boeing Programs for Magellan Aerospace who doubles as tournament director. “We were looking at it and going, ‘Geez, maybe this isn’t going to fly.’ ”

Through a good deal of “begging,” as Oakley put it, the field eventually grew to 39.

From there, the hospitality that members at Niagara Falls Country Club are known for took over.

“I think what sets us apart is when the girls come here, we treat them quite nicely,” Oakley said. “Their meals are taken care of. Wednesday night, we take them on the Maid of the Mist. We have a terrific players’ dinner plan for them. Pretty much once you get them into Western New York, they’re sold.”

That’s when word of mouth takes over.

“Once the girls came, they went back and talked to their teammates,” Oakley said. “Some of them wanted to play and couldn’t, for whatever reason, like prior commitments to other tournaments, but to a woman, they were applauding having another event on the circuit.”

The results have shown. This year’s field features 66 golfers – and Oakley had applications he had to turn down. Included in the field are eight of the top 100 players in the World Amateur Golf Ranking.

“To go from 39 to 66 and then to take it to the next level of the skill set is more than we really hoped we could do in one year,” he said during Wednesday’s first round. “We learned a lot from the first year as to how to market and how to provide invitations to different programs within the college ranks and globally, as well.”

The growth of the field in the women’s event actually exceeds the pace in which the men’s tournament grew. In 1959, the inaugural Porter Cup had 40 competitors. That number didn’t reach 60 until 1965.

“This is giving our local young ladies the opportunity to feel the pressures and the exhilaration of everything associated with golf,” Oakley said.“We have to be careful that we make the field competitive, but I’m looking at this as kind of a developmental-type tournament for some of our girls who maybe aren’t ready to go into the college ranks yet. They need to be tested. … So we think we have a nice mix of that.”

“It’s such a prestigious event that even to be asked is an honor,” said Amherst’s Julie Murphy, the Buffalo District Golf Association Women’s Player of the Year who is playing this week. “It’s a good test for the young kids. It’s good competition for them, to see what’s out there.”

The strength of this year’s field will do more than just test the best players in Western New York. It could also attract stronger fields in the future.

This year’s tournament has been given a field strength of “C” from the World Amateur Golf Ranking. There are four elite women’s amateur tournaments in the world, and the rest are given letter grades from “A’’ (strongest) through “G’ (weakest) dictated by the caliber of the field.

To achieve a “C” rating in just its second year bodes well for the future, according to Oakley.
“I’m pleased about that, because hopefully it will get us more notoriety and help us attract even more accomplished players next year,” he said.

First-round co-leaders Jennifer Ha and Brittany Marchand are two of the top-100 players in the field. Teammates on the Canadian national women’s amateur team, both opened Wednesday with rounds of 2-under 69.

“Overall, I played well,” Marchand said. “On the front nine I was hitting my driver sideways, but I made a few good saves.”

I was hitting my irons really well. I was sticking it close when I was in the fairway and had opportunities. It was a little bit of a scramble round, but if I can get my driver straightened out, I’ll be playing pretty solid.”

Four players – Hannah Pietila of Brighton, Mich., 17-year-old Princess Superal of the Philippines, and Canadians Augusta James and Christian Foster – are a shot back after opening rounds of 70.

The second round begins at 7:30 a.m. today, with the final grouping of Ha, Marchand and Pietila going off at 11 a.m.